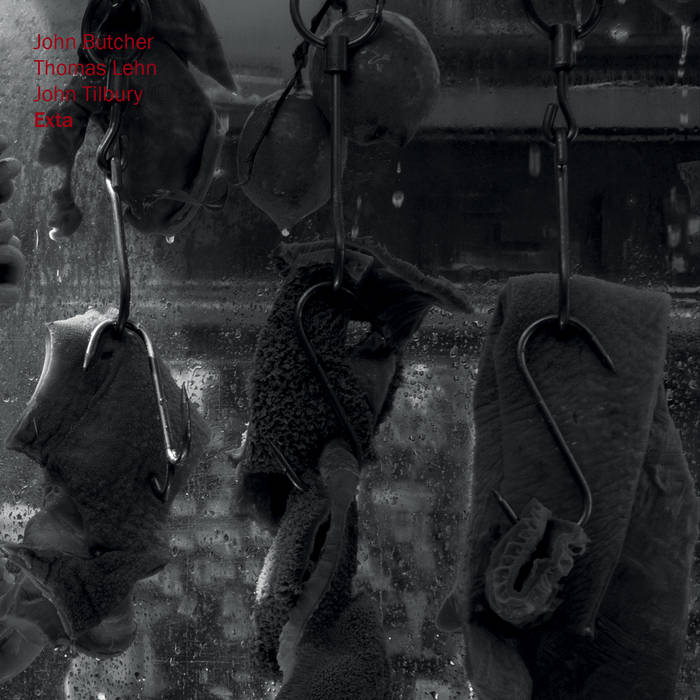 "Butcher’s sax ranges from soft, whispery purrs to teeth-chatteringly spiteful blasts. Lehn’s analogue synth leaps in a moment from burbling tones to fiercely sizzling abstraction, and Tilbury slips from his familiar melodic interludes and fragmented arpeggios to crashing, seismic attacks on the inside of the piano. What sets this album head and shoulders above similar offerings is the understanding between the trio. It’s not just the way all three move together as one from subdued lull to explosive rupture, but how each pushes at the others, stopping the music from settling into routine. Throughout the two-part “Pulmo”, each of the trio takes the opportunity to wrench the music from one direction to another with a sudden attack just as it settles into a plateau. More than a routine outing for three old heads, Exta is as vibrant, powerful and testing as anything we have heard from any of them in a while, which in itself makes it an essential addition to Improv’s history. " - Richard Pinnell, The Wire

"Those various organ meats might find further resonance in the different kinds of reverberation here, from the echoing sustain of Tilbury’s piano, Lehn’s continuous electronics, or Butcher’s circular breathing. As in ritual, it’s music in which the silences – occasional pauses and those silences contributed by whomever is not playing or is playing to the minimal degree to assert presence – are a potent part of what is heard. These are masters at work, three sages in a butcher shop, decorating an altar of silence with sound." - Stuart Broomer, Point of Departure

"stunning. As so often with the minimalist approach to music, building sparse sounds around silence, the listener gets shifted between the deception of calm and the illusion of darkness. Nothing you hear is predictable, yet you also know that it will not explode either. The result is an uncanny and relentless tension that starts the album and keeps haunting the listener even after the last sounds have ebbed away." - Stef, Free Jazz

In ancient Roman religious ritual, exta were the organs of a sacrificed animal offered up to the gods - the lungs, heart, liver and gall bladder; here, Exta is a selection of four pieces (one in two parts) carefully extracted from a long studio session.